Posted on December 9, 2011 by Bruce Littlefield 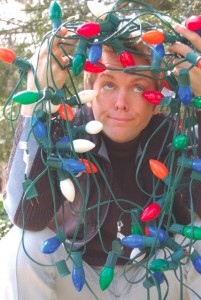 I don’t know about you, but boy are these busy times. I’m on deadline finishing a book. In the meantime, enjoy this tale from my book, Merry Christmas America:

My first memory of Christmas is of electric lights—electric being the key word. I was three years old, tinkering with lights beneath the bottom branches of a scrawny fir in my grandmother’s living room. In rural South Carolina, trees were plucked from wherever they could be found, and my grandmother typically found hers somewhere along the railroad tracks behind her mill village house. Every year, around Thanksgiving, she’d head down past her pecan trees, saw in one hand, my hand in the other, to find a scrawny specimen. In later years, after she’d snatched every sapling, from the depot a quarter mile to the north to the bridge a quarter mile to the south, she resorted to roadside nabbing, which she’d perform during one of her infamous saw-in-the-trunk shortcuts. My grandfather always drove the getaway car.

Each year after the hack job, she’d drag the thirsty thing back up to the house, stick it in a wrought iron stand, and pour it a cocktail of gingerale and water. We were teetotalers and it should be too. First came the lights. They were big and colorful. And, as I’d discover in a later Christmas memory, searingly hot.

But my real first Christmas memory is sticking the prongs of the plug into the outlet, along with my forefinger. The memory is shocking: stunningly, staggeringly electric. Think Phyllis Diller hair, and tears that burst forth like rain from an angry cloud.

Several years later, I had forgiven the lights, and my mother had become fast friends with a “crafty” sort named Judy McChesney. It was not uncommon to see McCall’s pantsuit patterns spread out on the shag rug of the McChesney’s living room and elaborate cross-stitch scenes framed on their walls. I remember arriving at Judy’s ornament decorating festivities and being instantly struck by the divergence of red, gold, and green splashed against 1970’s orange and avocado. Christmas in swank Technicolor. But nothing could have been as exciting to my six-year-old eyes than a stack of ribbon and a box filled with enough sequins and sparkly things to cover a Bob Mackie gown.

We made ornaments for hours, singing “Jingle Bells” at least a thousand times. It was the first song I could sing, and still runs neck-in-neck with the pa-rum-pum-pum-pumming “Little Drummer Boy” as a personal favorite. To this day, the bejeweled Styrofoam ornaments my mother and I made at Judy McChesney’s remain our personal favorites in our vast and ever-expanding collections.

As I grew older, my vision of the Christmas experience expanded—to outside our house, where it could be seen beneath the glare of the yardlights and the watchful eyes of judging neighbors. Bigger definitely became better. One year, the first year of the neighborhood Christmas decorating contest, I wrapped our house like a present. With a tall ladder and bolts and bolts of flawed red nylon from the textile plant where my dad worked, I made our house the biggest “present” in the neighborhood, rendering our front door, across which I tied the giant bow, completely unusable during the holiday season. Though I didn’t win the decorating contest, I did get my picture in the paper as the kid who “tried to wrap his house.”

A couple years later, in another failed attempt to win the “Best House” award and its congratulatory red-lettered sign, I made a tableau in which it appeared that Santa had fallen off our house into the giant molding leaf pile in our front yard. How the Nickels with their understated Charlestonian pineapple-candle-in-each-window routine beat my Santa-legs-and-black-boots-sticking-out-of-a-leaf-pile-and-flailing-about-in-the-breeze, beats me. But it did. Perhaps if we had snow in South Carolina, my concept would have been a little more compelling.

I never won the “Best House” award. But that didn’t or hasn’t stopped my Christmas decorating. I’m happy to live in the shadow of others who feel that anything worth doing is worth doing over-the-top. These are the true believers. Those who heard that God said, “Let there be light,” and bought in big. These are the ones who electrify our holiday and go all-out to make this Christmas the brightest, merriest, happiest Christmas ever.

Tradition! Do something fun with your family or sweetheart like driving around and looking at the Christmas lights. People go to a lot of effort to wrap you that twinkling gift! Looking is free!

Okay, okay. One joke! The recession has gotten us all rethinking gifts, scaling back on “the list.” Santa recently asked Dawn, a 21-year-old girl, what she wanted for Christmas. “Just something for my mother,” she replied sweetly. “That’s so thoughtful of you,” smiled Santa. “What would you like me to bring her?” Dawn quickly said, “A son-in-law.”

Now, light the lights and eat your dinner.