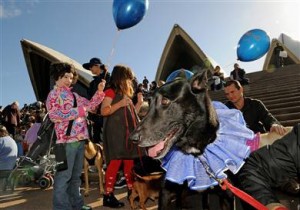 From one of my favorite New York performance artists, Laurie Anderson, and her rock legend hubby Lou Reed comes the single greatest concert ever. Pooches of all sizes put their paws together in Sydney last weekend for–you guessed it (or maybe you didn’t)–a dog concert. Anderson describes the 20-minute piece she wrote for the pups as “an inter-species social gathering on a scale never seen before in Australia.” New York City, it’s time for a dog concert. Who’s going to sign my petition? To get you and your four-legged friend in the mood, here’s who we’re getting to do backup vocals.