Posted on November 18, 2010 by Bruce Littlefield 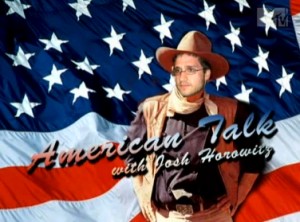 Those of you who know me know I don’t speak foreign words. They didn’t teach us those in South Carolina! So, I love today’s episode of MTV’s American Talk With Josh Horowitz (the only episode of American Talk), host Josh Horowitz tries to teach the foreign cast of Harry Potter to speak the right way — the American way. The national language of America is technically called English (um, colonial settlers were apparently from England). But, as “Harry Potter” stars Daniel Radcliffe, Emma Watson, Rupert Grint and Tom Felton learned, they talk weird! HP7 is out this weekend. Are YOU going?