What’s Up With America?

Posted on January 31, 2012 by Bruce Littlefield 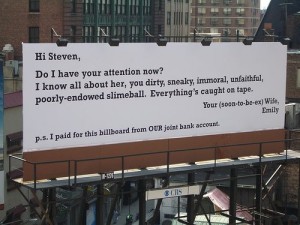 A great publisher I worked with at Harper Collins, the great Joe Tessitore, told me shortly before his retirement that he considered me the “What’s Up With America? guy.” Along those lines, I thought I’d start a new series here at brucelittlefield.com called “What’s Up With America” and feature the things that seem to be too fun, whacky, nutty, interesting to ignore… Like this billboard that just went up in Manhattan on 54th Street and 7th Avenue. As the fantabulous Cindy Adams would say, “Only in New York!”

This entry was posted in Dinner Party Talk, Gossip!, Life 101, Quick Fixes, Uncategorized, What's Up WIth America? and tagged #americana, #brucelittlefield, #life101, divorce, how to handle cheater, only in America. Bookmark the permalink.
Logging In...