Posted on February 8, 2011 by Bruce Littlefield 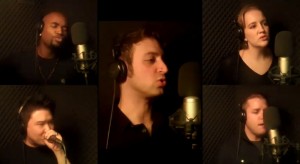 Yes, Glee is fun (even after their bizarre, less than Thrilling, Super Bowl play), but when I heard Duwende at Sundance this year, I wrote their name in my notebook. They have a cover album, and the coolest version of Michael Jackson’s Thriller I’ve ever heard, all a capella! According to their YouTube channel, the song contains no lip syncing. All the background tracks were recorded and filmed together. What you see is what you hear in real time. And it’s nothing short of amazing. I’m a fan!