Posted on October 22, 2010 by Bruce Littlefield 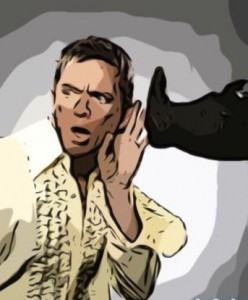 Serving up a plateful of conversation.

If you want to see titillating and tasteless, pick up a copy of this month’s GQ. Photographer Terry Richardson brings to life high school fantasies in a photoshoot featuring Glee’s Lea Michele, Dianna Agron, and Cory Monteith. It makes me feel dirty.
Speaking of dirty. Visited my grandparents this week for my Pop’s 90th birthday. I noted my grandmother loves her some hand sanitizer. A new survey reports that people think hand sanitizer works for an hour or more. Um, it only protects for two minutes. “The best germicidal thing you can do is wash with soap and water,” says a doc.
If you see something, say something. This week the jury convicted the so-called “Newburgh 4” for plotting to bomb synagogues in New York and shoot down military planes. The four men were arrested in Newburgh, which has a startling poverty rate of almost 30%. Poor, however, is no excuse for terror. The four face life sentences.
Speaking of courts. The federal judge, who ruled “Don’t Ask, Don’t Tell” unconstitutional, refused to allow the government’s stay request and military recruiters were told by the Pentagon to begin enlisting openly gay people. Former lieutenant Dan Choi, one of the most outspoken critics of DADT, went to the Times Square recruiting station to sign up for the Marines. He was denied. Not because he’s gay, but because he’s too old. Ouch.
Speaking of old. Two TV parents died this week. Barbara Billingsley, a.k.a. June Cleaver, died at her home in Santa Monica, and Tom Bosley, Happy Days’ model dad and hardware store owner Howard Cunningham, died at 83. In their honor, this weekend let’s all buy something at our local hardware store and then go home and vacuum in our pearls.
Now, eat your dinner!