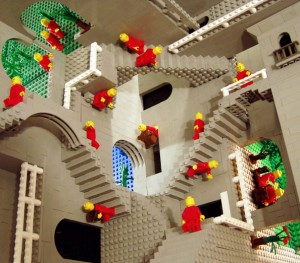 Legos are internationally beloved by kids of all ages, the perfect plastic medium to build anything your mind can invent. I just visited the Lego store in NYC and was inspired. Did you know Legos began in a small village in 1930s Denmark, a carpenter named Old Kirk Christiansen opened a store to sell the wooden toys he carved in his spare time? He named the shop “leg godt,” which means “have fun!” in Danish. In the 1950s his son took over and switched building materials from wood to plastic. Not long after adopting plastic, he came up with the stud and tube brick system used in modern Legos, and… today nineteen billion bricks are made every year. Have FUN!

This entry was posted in History of Fun, Life 101, Travel, Uncategorized and tagged #americana, #brucelittlefield, #fun, #lego, #NYC. Bookmark the permalink.
Logging In...