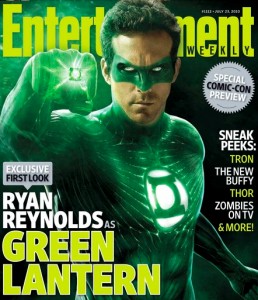 Entertainment Weekly has a sneak peek at Hollywood’s next superhero, Ryan Reynolds as The Green Lantern. If I were a betting man, I’d buy me some stock in Green Lantern on the Movie Futures Market. It’s got SMASH written all over it. With Ryan’s power ring (and his six-pack abs) I’ll go out on a limb and bet he’ll save the universe and bankroll the studio. In this week’s EW, Ryan talks about the frightful feat of being propelled at 60 feet a second on a wire to create the illusion of flying and admits, “The first time you do it, you’re deeply considering an adult diaper.” Ryan, keep the green suit. But who knew they make an adult swim diaper? Reminds me of a sign I saw as a kid at a South Carolina country club:
“OOL. (notice there’s no ‘P’ in our pool.)”