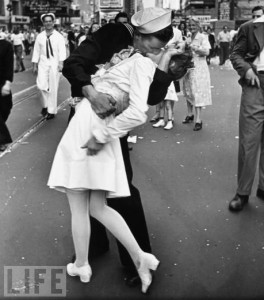 It has been 65 years since LIFE’s Alfred Eisenstaedt snapped the photograph of a sailor planting a kiss on the lips of a nurse in Times Square. The August 14, 1945 photograph (shortly after the Japanese surrender effectively ended World War II) has become one of the most famous photographs ever made. The image is still visual shorthand that the “War is over!” Edith Shain, the woman in the photograph (or, at least, the woman widely believed to be in the photograph … read about it here!), died this week in Los Angeles at the age of 91. But the story of the picture will never die. Now, I ask you, look closely at the photograph. What’s that headlock move the sailor has on her? Shall we politely call it the kissing cradle?