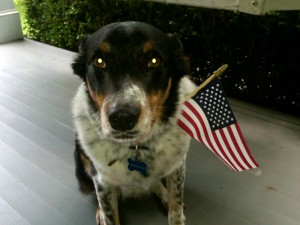 It’s July 4th, the day we Americans celebrate freedom and independence with barbecues, fireworks, and drinking a lot* of beer. (*Independence Day is the day the most alcohol is consumed in the U.S.A.) But just so we’re all clear, King George thought we Americans were revolting. By the way, how much do you know about America? Do you, for example, know where the Declaration of Independence was signed? Well, I’ll tell you… On the bottom!
Salute a soldier. Here’s an idea to add some red, white and blue to your barbeque: While your guests are drinking all your beer, bring out some stationery and ask them to write a letter to the troops. Operation Gratitude sends letters and packages to service members and it really lifts their day. Send your goodies to Operation Gratitude, 17330 Victory Boulevard, Van Nuys, CA, 91406.
Westminster wants to wish you a happy Fourth of July… and say thanks for checking out The Bedtime Book for Dogs.
What did one flag say to the other? Nothing! It just waved.
Happy Independence Day!