Posted on February 6, 2011 by Bruce Littlefield 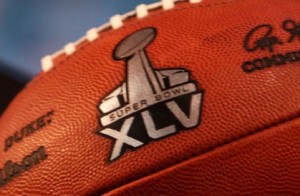 Watch this 1967 newsreel featuring the first Super Bowl ever , which pit The Green Bay Packers against the Kansas City Chiefs. It was played in Los Angeles, and the Packers won 35-10. This year’s game, XLV, the Packers vs. the Steelers and I’ve Got a Feeling that the Black Eyed Peas’ half time performance will be more exciting than the balloons released at the first Super Bowl. Oh, and your chips and salsa and 6-foot sub are nothing compared to these super-sized Guinness World Record holders. Go ahead and try to make 3,556 lbs of nachos like they did last year in Frisco, Texas. It was 48 feet long and made with 300 cases of tortilla chips. Oh, who am I kidding, Westminster and I are watching the Puppy Bowl!