Posted on January 5, 2011 by Bruce Littlefield 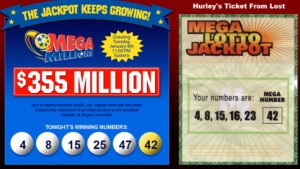 Congratulations to the TWO winners who will share the $355 Mega Million jackpot! You lucky dogs! Tuesday’s real world winning numbers were 4, 8, 15, 25, 47 and 42. But there were 25,587 tickets that matched three of the winning numbers, plus the bonus number. Why? Apparently, Hurley, a character in ABC’s show “Lost”, once won the lottery with those numbers. “Lost” watchers apparently bet it was coming and each of those people win $150! How crazy is that? Finally, watching TV pays off!