Posted on November 30, 2012 by Bruce Littlefield 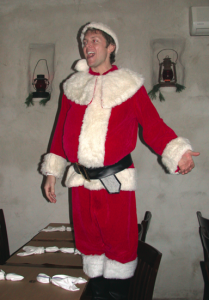 Back in the days when we owned a restaurant, I liked to suit up. But when I grow up, I don’t think I could ever be a mall Santa. According to a survey of the Amalgamated Order of Real Bearded Santas, whose many members sit on thrones at 1,130 malls in America, Santas are sneezed on up to ten times a day; nine out of ten have their glasses yanked off or their beard pulled every day; and one-third of them have had to change clothes after being used as a potty. That last one is the final decision maker: Forget the Santa outfit, I’m enrolling in Elf school. Merry Christmas America!

This entry was posted in American Fun, Dinner Party Talk, Holidays, Life 101, Parties, Uncategorized, What I'm Doing, When I Grow Up and tagged #americana, #brucelittlefield, #merrychristmasamerica, #realsanta, #santafacts. Bookmark the permalink.
Logging In...