Posted on September 23, 2010 by Bruce Littlefield 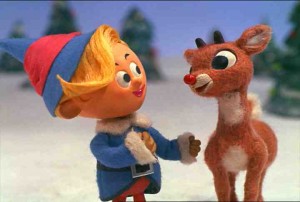 Billie May Richards, the voice of Rudolph the Red-Nosed Reindeer, died recently in Toronto. She was 88. She’ll be remembered fondly, and as she told NPR in 2004: “”What better legacy can you leave than a show that everybody loves?” This is also a great opportunity to post a video of Herbie, the elf who wanted to be, you got it, a dentist. People are always telling me I remind them of him. I’ll take it as a compliment…Rudolph premiered in 1964 on CBS, and Herbie still looks great!

This entry was posted in American Icons, Gossip!, Uncategorized and tagged #americana, #billiemayrichards, #brucelittlefield, #rudolph. Bookmark the permalink.
Logging In...