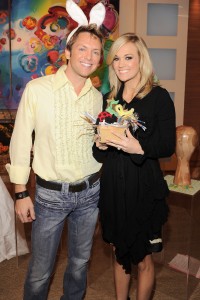 Bruce and the real Carrie on the CBS Early Show set.

I think William Hung’s long-lost dad as been found! In Kansas! And he’s a real karaoke star! At the Carrie Underwood themed karaoke contest (appropriately dubbed the “Carrie-Oke” contest) a rising star has stepped to the stage: Mr. Wong, a Chinese gentleman with a penchant for screech. This video of his improvised (um, erratic) version of Carrie’s hit, “Before He Cheats” is sure to become an Internet smash. Does he really think he’s going to win the prize (tickets to Carrie’s concert) or was Mr. Wong just on the losing end of an “I dare you” bet?